January 14, 2013
Structured cabling is building or campus telecommunications cabling infrastructure that consists of a number of standardized smaller elements (hence structured) called subsystems. Structured cabling falls into five subsystems: Demarcation point is the point where the telephone company network ends and connects with the on-premises wiring at the customer premises. Equipment or Telecommunications Rooms house equipment and wiring consolidation points that serve the users inside the building or campus. Vertical or Riser Cabling connects between the equipment/telecommunications rooms, so named because the rooms are typically on different floors. Horizontal wiring can be IW (inside wiring) or Plenum Cabling and connects telecommunications rooms to individual outlets or work areas on the floor, usually through the wireways, conduits or ceiling spaces of each floor. Work-Area Components connect end-user equipment to outlets of the horizontal cabling system. Structured cabling design and installation is governed by a set of standards that specify wiring data centers, offices, and apartment buildings for data or voice communications using various kinds of cable, most commonly category 5e (CAT-5e), category 6 (CAT-6), and fibre optic cabling and modular connectors. These standards define how to lay the cabling in various topologies in order to meet the needs of the customer, typically using a central patch panel (which is normally 19 inch rack-mounted), from where each modular connection can be used as needed. Each outlet is then patched into a network switch (normally also rack-mounted) for network use or into an IP or PBX (private branch exchange) telephone system patch panel. 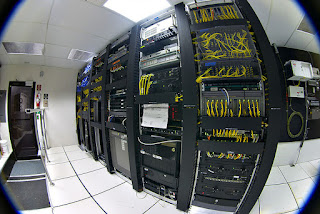 A 19-inch rack is a standardized frame or enclosure for mounting multiple equipment modules. Each module has a front panel that is 19 inches (482.6 mm) wide, including edges or ears that protrude on each side which allow the module to be fastened to the rack frame with screws.
Equipment designed to be placed in a rack is typically described as rack-mount, rack-mount instrument, a rack mounted system, a rack mount chassis, subrack, rack mountable, or occasionally simply shelf. The height of the electronic modules is also standardized as multiples of 1.75 inches (44.45 mm) or one rack unit or U (less commonly RU). The industry standard rack cabinet is 42U tall.

VLAN:
In a layer 2 switched network, each network segment has its own collision domain and all segments are in same broadcast domain. Every broadcast is seen by every device on the network. A layer 3 device (typically a router) is used to segment (divide) a bradcast domain to multiple broadcast domains.
By default, all ports on a switch are in the same broadcast domain. A Virtual Local Area Network, Virtual LAN, or VLAN, can be used to segment (divide) a single broadcast domain to multiple broadcast domains in a layer 2 switched network
How do you secure dedicated servers hosting?
How do you segregate customers from each other?
How do you offer easy managed firewall services? How do you save precious IPv4 addresses?
With Private VLANs you can deploy a secure and managed IPv4 dedicated hosting with ease. With Private VLANs, there is no need to allocate an expensive wasteful IPv4 subnet for each customer. Just allocate a Community VLAN for each big costumer or one big Isolated VLAN for all small costumers and you are done! Private VLANs are a wonderful network segregation tool, but they are hard to deploy and operate.

The main advantages of VLAN are listed below.
• Broadcast Control: Broadcasts are required for the normal function of a network. Many protocols and applications depend on broadcast communication to function properly. A layer 2 switched network is in a single broadcast domain and the broadcasts can reach the network segments which are so far where a particular broadcast has no scope and consume available network bandwidth. A layer 3 device (typically a router) is used to segment a broadcast domain. If we segment a large LAN to smaller VLANs we can reduce broadcast traffic as each broadcast will be sent on to the relevant VLAN only.
• Security: VLANs provide enhanced network security. In a VLAN network environment, with multiple broadcast domains, network administrators have control over each port and user. A malicious user can no longer just plug their workstation into any switch port and sniff the network traffic using a packet sniffer. The network administrator controls each port and whatever resources it is allowed to use. VLANs help to restrict sensitive traffic originating from an enterprise department within itself.
• Cost: Segmenting a large VLAN to smaller VLANs is cheaper than creating a routed network with routers because normally routers costlier than switches.
• Physical Layer Transparency: VLANs are transparent on the physical topology and medium over which the network is connected.

Types of VLAN connection links - Trunk Links and Access Links
There are two types of VLAN connection links and they are Access link and Trunk link. The difference between access link and trunk link are given below.
• Access link: An access link is a link that is part of only one VLAN, and normally access links are for end devices. Any device attached to an access link is unaware of a VLAN membership. An access-link connection can understand only standard Ethernet frames. Switches remove any VLAN information from the frame before it is sent to an access-link device.
• Trunk link: A Trunk link can carry multiple VLAN traffic and normally a trunk link is used to connect switches to other switches or to routers. To identify the VLAN that a frame belongs to, Cisco switches support different identification techniques (VLAN Frame tagging). Our focus for CCNA examination is on Inter-Switch Link (ISL) and 802.1Q. A trunk link is not assigned to a specific VLAN. Many VLAN traffic can be transported between switches using a single physical trunk link.

A patch cable or patch cord is an electrical or optical cable used to connect ("patch-in") one electronic or optical device to another for signal routing. Devices of different types (e.g., a switch connected to a computer, or a switch to a router) are connected with patch cords. 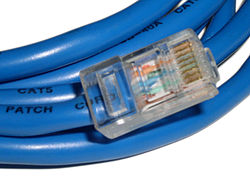 A crossover cable connects two devices of the same type, for example DTE-DTE or DCE-DCE, usually connected asymmetrically (DTE-DCE), by a modified cable called a crosslink.
A data circuit-terminating equipment (DCE) is a device that sits between the data terminal equipment (DTE) and a data transmission circuit. It is also called data communications equipment and data carrier equipment. Usually, the DTE device is the terminal (or computer), and the DCE is a modem.
Data terminal equipment (DTE) is an end instrument that converts user information into signals or reconverts received signals. These can also be called tail circuits. A DTE device communicates with the data circuit-terminating equipment (DCE). 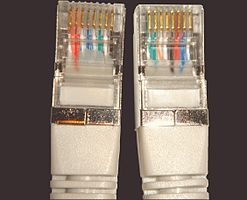 A network switch is a computer networking device that links network segments or network devices. The term commonly refers to a multi-port network bridge that processes and routes data at the data link layer (layer 2) of the OSI model. Switches that additionally process data at the network layer (layer 3) and above are often called layer-3 switches or multilayer switches. 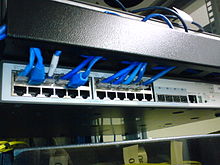