The Smurf attack is a category of network-level attacks against hosts with the goal of denying service to the hosts. A perpetrator sends ICMP echo requests (ping) traffic to an IP broadcast address using a spoofed source address of a victim. On a multi-access broadcast network, there could potentially be thousands of machines to reply to each packet. The Smurf attack’s cousin is called “fraggle”, which uses UDP echo packets in the same fashion as the ICMP echo packets. Currently, the machines most commonly hit are IRC servers and their providers. Because Smurf is a Denial of Service attack, it impacts most devices that process packets.

The two main components of the Smurf attack are the use of forged packets and the use of a broadcast address. In the Smurf attack, attackers are forging or spoofing the source address on ICMP echo requests and sending them to an IP broadcast address. This causes every machine on the broadcast network to receive the reply and respond back to the source address that was forged by the attacker. With this type of
attack, there are three parties involved: the attacker, the intermediary (the broadcast address to which the packets are sent), and the victim (the forged source IP address).
In this type of attack, the intermediary can also be a victim. This is the case because when all the machines on the intermediary start replying back to the forged address, it can generate so many packets that it uses up all the bandwidth of the intermediary network.To start this attack, the attacker generates an ICMP echo request (which is the same as a ping) using a forged source address and a broadcast address as the destination. The intermediary receives the ICMP echo request, which is directed to the broadcast address of its network. This causes the packet to be sent to all machines on that network segment, with each machine replying to the request and sending an ICMP echo reply back. When all the machines on the network reply, this could potentially result in degraded service or Denialof Service for that network segment due to the high volume of traffic generated. Because the source address on the packets was forged, all the replies go back to the source address that was specified, which now becomes the victim’s machine. Because a large number of packets are being sent to the victim’s machine, this could cause network congestion or potentially make the network inaccessible.
Now lets try do to the smurf attack and also analyse its tcpdump. 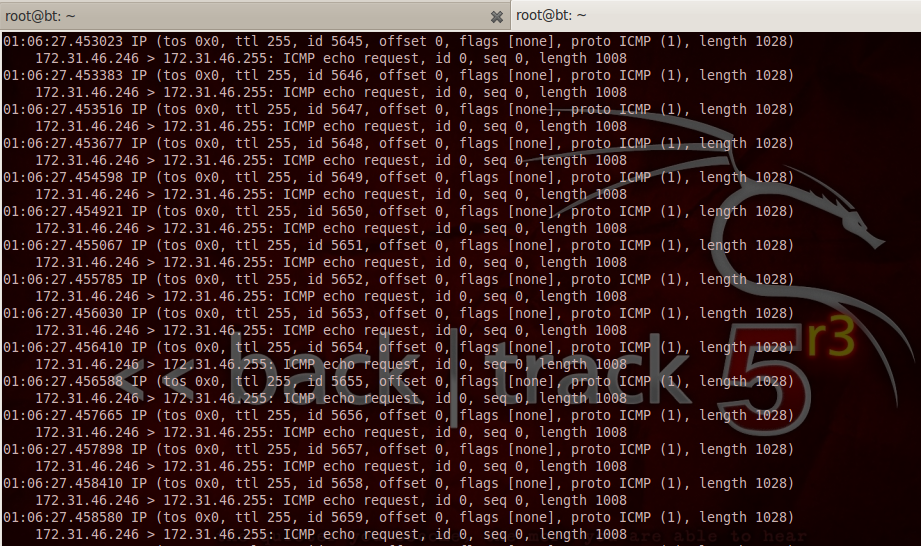 As you can see in above screenshot that smurf is sending forged ICMP request packet to broadcast address by spoofing source IP.Now all the network PC will reply to this ICMP request and this will slow down the victim 172.31.46.246 and ultimately cause Denial of Service.